How do I make a character to join in the 3.5e Playtest?

Can’t find your dusty old 3.5 books, got too much of that new game system on your mind? Well have no fear, everything you need to know to create your Cailore Fantasy character is right here in an easy to follow 8-step program. You can use either the old fashion pen-and-paper version of character creation or you can use a character management application, like Hero Lab. If you are using a program make sure you are set to use OGL 3.5 rules, this is not the same as Pathfinder, which uses considerably different rules for character creation. If you are making your character old-school, you’ll need a character sheet. My favorites are Mad Irishman Productions, Marcus Downing’s, and if you really want to get nostalgic, there is the official Cailore Campaign sheet we used back in the 90s. There is also the old Hero Forge Excel spreadsheet you could use if you want, it does the math for you like Hero Lab, but might not be as easy to use, but it is free.

Race will modify many of the abilities and skills your character possesses, but even more importantly, race will affect how your character fits into the game world. You can find information on races and their relationships in the campaign world by clicking here. Since we are going to be using Fantasy Grounds to playtest this adventure, we are going to use the same basic statistics for each race as they appear in the 3.5 System Rules Document (SRD), not the Cailore Fantasy versions—they are similar, but there are differences. If everything goes well, I’ll create data files with the Cailore Fantasy rules for both Fantasy Grounds and Hero Lab which will allow you to use the Cailore versions if you wish. For now however, consult the SRD.

Just as with races, if things go well, I’ll make data files to be able to use all the Cailore Fantasy classes and prestige classes in Fantasy Grounds. But for right now, you are limited to the basic classes from the the 3.5 SRD. Those available are:

What are Your Character’s Ability Scores?

Now that you know what kind of character you want to make, its time to assign some good attribute scores to put some meat on those bones. For the play test we will be using a 28-point buy system. This should give everyone a strong character to start with.

Each character receives 28 points to spend on increasing his basic attributes. In this method, all attributes start at a base of 10. A character can increase an individual score by spending some of his points. Likewise, he can gain more points to spend on other scores by decreasing one or more of his ability scores. No score can be reduced below 7 or raised above 18 using this method. After all the points are spent, apply any racial modifiers the character might have.

The costs for each score are:

After you have bought your ability score, then modify it for your character’s race. If you don’t want those penalties to get out of control, you may wish to make sure to put a couple points into whatever ability score it is your race has trouble with, or just embrace the suck and go all in. 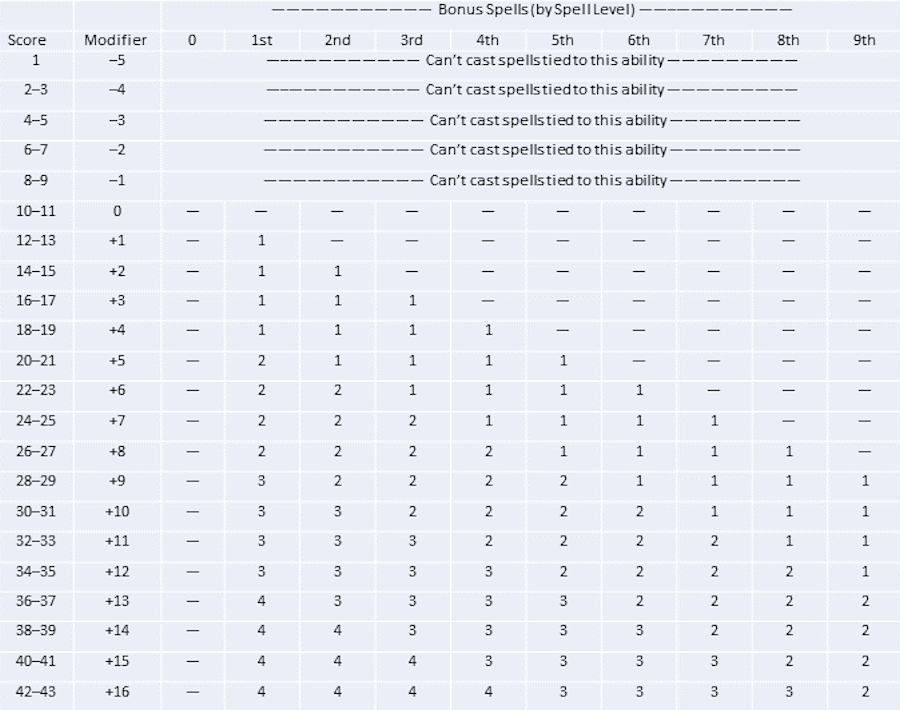 What are Your Character’s Feats?

Humans begin with two feats, other races begin with one. Fighters get a bonus feat at first level. Choose your beginning feat(s) from the standard 3.5 SRD list.

What are Your Character’s Skills?

Determine the number of skill ranks your character, has based on their class and Intelligence modifier (and any other bonuses, such as the bonus received by humans). Then spend these ranks on skills, but remember that you cannot have more ranks than your level+3 in any one skill (for a starting character, this is four). Skills listed as “class skills” in your class description are bought one rank for one point, for skills not on your class list, the cost is double, so one skill point only gets you 1/2 a rank.

What Equipment does Your Character Have?

The characters for the play test all start with 100 gp to purchase equipment. Cailore Fantasy usually uses a different system of money, but we are going straight SRD for the playtest. You can use the 3.5 SRD equipment list for your purchases. Pay attention to the weight of your gear, I will.

What is Your Character’s Story?

Where is your character from? What do they look like? What kind of upbringing did they have? Why did they decide to become an adventurer? Write this stuff down on the character sheet so the game master can have a bit of understanding about your character, great role playing opportunities might come from it.

You can use the standard age and height/weight tables to help you flesh out the details:

Alternatively, refer to Table: Random Starting Ages and roll dice to determine how old your character is.

When a character reaches venerable age, secretly roll his or her maximum age, which is the number from the Venerable column on Table: Aging Effects plus the result of the dice roll indicated in the Maximum Age column on that table and records the result, which the player does not know. A character who reaches his or her maximum age dies of old age at some time during the following year.

The maximum ages are for player characters. Most people in the world at large die from pestilence, accidents, infections, or violence before getting to venerable age.

If you used Hero Lab, you can send me the .por file you used and I’ll import it. If you used an old style character sheet, you can just scan it in to me and send it as a .pdf or a graphics file, .png is usually the easiest to read for the file size. If you used Hero Forge you can either send me the whole spreadsheet or just a .pdf of the the Character Sheet pages (I & II). Leveling up during the adventure will be done in Fantasy Grounds. I will make a basic character illustration based on your description or if you have some artistic talent you want to put on display, feel free to send me your own work.

If I’ve missed anything, or if you need any help let me know. You can message me directly or use the comment form below.

I look forward to seeing your characters and make sure you are following https://www.facebook.com/cailore.fantasy/ to stay current with any news about the game.