Before our content is released we play in through a couple of times on Fantasy Grounds. If you would like to join @CailoreDM for one of these events, send him a message.

We are currently finishing up the 5e version of the Lairs of Lawlessness and it’s been a blast. Watch this category for future announcements.

Open Game License (OGL) 5e (You can download the Dungeons & Dragons 5e basic player’s guide here). This SRD will largely be applied RAW (Rules as Written) using the platform’s standard rule file. As the campaign progresses more ‘homebrew’ character options will be available and will be described on Cailore.com.

It is helpful if players are familiar with the rules of the System Rules Document (SRD) but are not required, we are happy to help newcomers to the system. Many of the players will be using Fantasy Grounds for the first time, so no experience with Fantasy Grounds is expected.

The game is run online using the virtual tabletop Fantasy Grounds. The Game Master runs the Ultimate edition of the program, so players can participate using any edition, including the free Demo version, which is available for download here: https://www.fantasygrounds.com/ 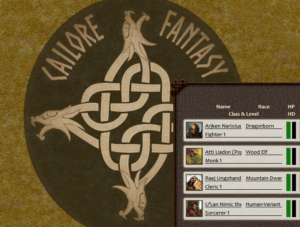 You can watch a pretty good player tutorial here:https://youtu.be/dAshnF025KA It will give you a nice jump-start on understanding the platform.

You can also read the user manual here: https://www.fantasygrounds.com/filelibrary/FantasyGroundsUserManual.pdf.

The Host Address,will be provided to you if you are accepted into the party. 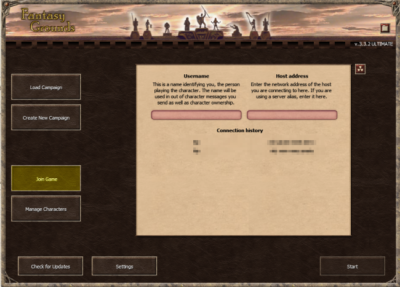 If you have already submitted a character to play, enter your username as the name of your character if you haven’t done so, enter your real name and you can select a pre-generated character on the other side.

We will accept a maximum of 12 players into the ‘game pool’ however, only 8 will be able to play at a given time, with the remaining players being held in standby. If you are unable to attend a session, you can keep your seat for the next session by informing the DM at least four hours before session start. Players who are a no-show without notice or miss three sessions in a row for any reason will be removed from active status and their spot in the party given to one of the stand-by players.

Your character will only receive XP for events that happened while you were in the party, if you miss a session, you will not be awarded XP for those events. ‘Chapter Bonuses’ are awarded at various milestones during play, you are only eligible for those awards if you were present during every session during that chapter.

The target style for this game is Relaxed Fantasy Adventure. There will be light role play, with players expected to interact with the game world from their character’s point of view and an honest attempt at developing an involved in-game persona should be made, but this isn’t Emo-Shakespeare—no one is going to be earning an Oscar for their performance, and some Out of Character (OOC) hijinks is permitted and good ‘table fun’. The challenges facing the Player Characters (PCs), will include basic combat, strategic planning, skill challenges, and role-playing challenges. Many, if not most, of the challenges confronting the party, will be possible to overcome with more than one of those approaches so the overall balance of game elements will be dependent upon the choices made by the players throughout the game.

The Game Master makes no requirements upon PC alignment; however, players should be prepared for the consequences of their choices. In heroic fantasy, evil always consumes itself.

The players will be playing through the adventure Lairs of Lawlessness, which takes the players from 1st level to 7th level.

There will be no extended downtime during the adventure.

You may create 1st-level characters for the campaign using the point buy process on using HeroLab or D&D Beyond, or you can sign into the game 30 minutes before a session and I can help you through character generation in Fantasy Grounds.  You may use any homebrew information I’ve shared either on Cailore.com or D&D Beyond and the 5e Player’s Handbook—subject to the following restrictions:

No Evil characters. While those can be fun to play, this is not that sort of campaign.

Generally, I do not suggest players use Drow, Dragonborn, Half-Orcs or Tieflings. The natives will literally start shooting at you on sight—races such as these have a long history of attacking human settlements in this game world. If you have a really strong character concept and are willing to face the story consequences of playing a character of a race who steals human babies and eats them, email me and we can talk. You should be aware that once of the story consequences is that the party itself may attack you when you stroll up.

Monks and Warlocks have story implications within the campaign world and are not free agents of their own destiny, for this reason, I strongly suggest you do not play one unless you are comfortable taking orders from NPCs and are willing to sacrifice your character’s life doing so.

Fantasy Grounds creates a particular type of game environment so all facets of this will not be discussed, but the following elements will be of interest to players:

To ensure the game moves in a quick and orderly manner, players will be expected to have their action ready when it is their initiative. If a player has not declared an action or intent within 20 seconds of the bell ringing for their initiative, action will pass to the next character or creature in initiative order.

Although we will have voice chat to facilitate some forms of communication, especially coordinating long-term actions and socializing, all character actions or statements made in character to in-world NPCs will need to be entered in the Fantasy Grounds chat field. This is to create an immutable record of the action and allow for easy review of previous sessions if the need arises. Once you hit enter, no take-backsys.

Fun is the primary focus of adventure and no expectations are made upon the players to ‘forget what they know’ about the game. So long as meta-play does not lead to arguments with the Game Master, there are no penalties for acting out, or even discussing meta-knowledge.

Experience points will be awarded throughout play for overcoming challenges, regardless of the method of success. Combat, skills, planning, and role playing are all awarded equally. Bonus points may be awarded at any time for actions or role playing that significantly advance the story, character development, or progress toward goals. Progression rates are ‘standard’. Inspiration is awarded liberally for role playing, creative play, and teamwork.

If a character earns enough experience to achieve a new level, they may level up either at the end of the game session, or during the next play break, if they believe they can accomplish the leveling within 5 minutes time. At lower levels, this should not be an issue, especially if the player has thought about what direction they want to take their character. There will be a group pause for leveling when all PC have earned enough XP to be awarded 2nd level.

You can contact the Game Master through any of the following: