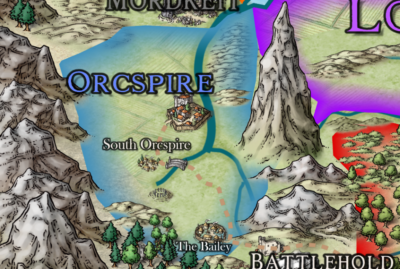 South Orcspire (AU 3134) is an agrarian center in the Grand Barony of Orcspire, in the Near North region of Auctorus. The town is governed by a council of guild elders, but absolute authority lies in the Arch-baron of Orcspire. The town council, however, keeps the laws just, the taxes paid, and trade flowing, so the Arch-baron his happy enough to leave the day-to-day administration in their capable hands. Farmers from the region take their crops to South Orcspire to be sold or milled before merchants take the goods down river to the greater cities of the Near North. Little besides the area’s fine honey gets traded far from Orcspire however. The town is generally peaceful, but it is the largest settlement on the borders of human civilization. The regions to the south were lost to marauding humanoids while human armies were preoccupied during the War of King’s Fall.

Dwarfwater River
This major river runs from the dwarven settlement of Battlehold in the south to the Gulf of Stars. From there sea travel to the entire world of Ǻrth is possible.

Baron’s Men
There is a small garrison of 20 of the Arch-baron’s men-at-arms stationed in South Orcspire to respond to any threats from possible invaders. The Baron’s Men also maintain a local armory that can equip a local levy of up to 175 men with longspears and studded leather armor if the local population should need to be mustered.

Town Council of South Orcspire
The local masters of the merchant’s, blacksmiths, porters, wheelwrights, and millers guilds hold permanents seats on the council of seven. The remaining recognized guilds rotate through the two temporary seats, holding their position for two years, with the appointments being offset by one year, so each year one of the temporary positions is changed out. While there are some politics and infighting, the council largely operates with the community’s best interests at heart.

Lairs of Lawlessness
Sir Aylard the Younger is currently calling for heroes and adventurers to aid him in reclaiming the lands to the south of South Orcspire and reopen trade with the dwarves of Battlehold and reclaim fertile farmland which has laid fallow since the War of King’s Fall.