Sir Aylard the Younger comes from a long line of knights who have served the barons of Orcspire since the creation of the domain hundreds of years ago. Aylard the Younger has recently been selected by the Baron of Orcspire to tame the lands of the Upriver region which have been overrun by dangerous humanoids for a generation. 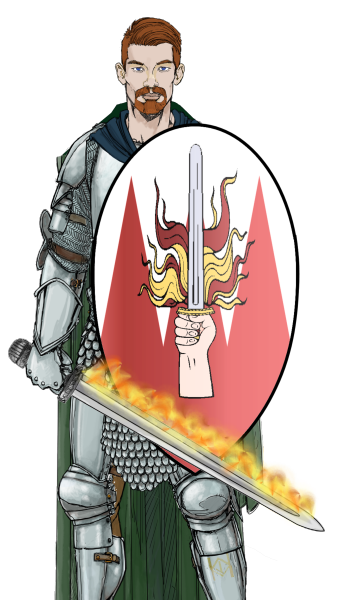 Sir Aylard’s father is a Knight Commander from Orcspire and his mother comes from a wealthy merchant family. Graced with such connections and wealth, Aylard was sent to the Royal Academy of War in Cabalan where he learned the finer points of mounted warfare, etiquette, and leadership.

Aylard the Younger consistently tries to do the lawful and good thing in all his interactions. He has a strong desire to be a hero people can look up to. He takes great pride in his noble status, but seems not to be afflicted with the arrogance or cruelty endemic in many nobles.

Sir Aylard’s training in mounted warfare has given him the following feats which make him particularly dangerous in while mounted. His Mounted Combat feat allows him to attempt to negate a hit to your his in combat. Aylard’ Ride-by Attack feat means he can move, attack, then move again when charging mounted. If Aylard has space to bring his mount to a charge, his Spirited Charge feat grants double damage when making a mounted charge attack. The feat usually allows for triple damage when a lance is used, but Aylard generally prefers to use his flaming longsword.

APPEARANCES
Sir Aylard is the lord of the bailey in the Adventure Portfolio Lairs of Lawlessness, an introductory adventure for 2 – 5 characters, levels 1 – 3.