You can now get the Nordkalender for your Fantasy Grounds campaign for free on DriveThruRPG.

The standard calendar used on Auctorus is the Nordkalender. The calendar consists of 13 lunar months of 28 days each, with four seven-day weeks per month. The calendar itself is based upon traditional 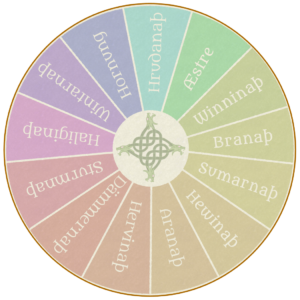 calendars used in northern Europe prior to the rise of the current timekeeping system. A lunar month is convient for members of low-technology societies as one only needs to look at the sky to get an idea of the ‘date’. In the case of the Nordkalendar, the lunar month begins with the new moon and has a full moon in the middle of each month which serves as a holy day.

On Ǻrth the lunar and solar years coincide, with the first of each year beginning on the new moon of Winternaþ. The full moon occurs on the 14th of each month, which is the second Himildagr. Of course, not every world (probably very few) have their solar years and lunar years synchronized, but that shouldn’t stop societies from using lunar calendars, as humans on Earth from using lunar calendars for thousands of years.

Use in other Game Settings

The Nordkalender works well as a calendar for homebrew games where there is a strong nordic theme, or if your setting has dwarves or elves who speak a Norse-based language.

The months of the Nordkalender are divided between the four standard seasons found in most game worlds, with Autumn receiving the extra, odd lunar month, although Haliginaþ is probably more accurately winter for settlements not in the coastal regions of the north.

In the north, the time around the full moon was always a perilous time. Not only did usual night-time predators stalk the dark, but werewolves and other dangerous lycanthropes were common in the old days, and the people had few protections.

In response to this situation, the people of the north developed a tradition of gathering during the day of the full moon at the longhouse of the local leader. There the community spellcasters would lead the public in sacred rites and sacrifices meant to keep the people safe, then that night, they would stay together in the lord’s longhouse for feasting and communal defense. This also led to the tradition that in the north religious objects and symbols of authority are most often crafted of silver.

Use in Fantasy Grounds 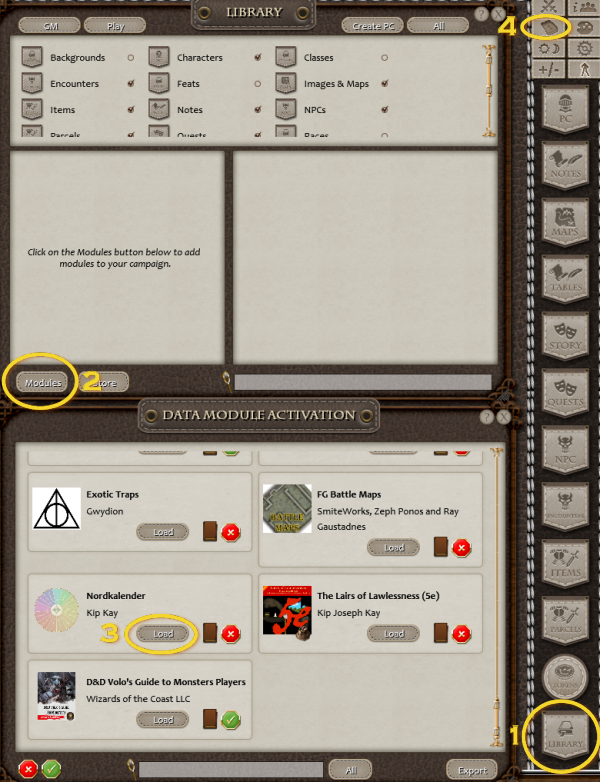 Nordkalender in your fantasy RPG. It should be compatible with any rule set you use on Fantasy Grounds. Click here to find the file. Once you download it, place it in the Fantasy_Grounds_Data > Modules folder.

Once you are in your campaign, you’ll need to:

The Nordkalender is offered as a a Pay What You Want item, if you enjoy it, please consider supporting my work with small amount of money.